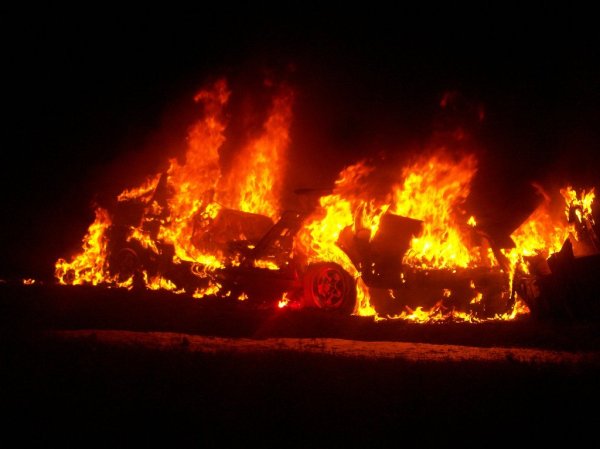 Car bombing has become synonymous with the Middle East in recent years, so few people would be surprised to realise that this most destructive and indiscriminate form of terror became established in this part of the world.
However, less well known is the fact that this was originally a Jewish weapon used against the Arabs.
The method of killing and destruction was actually pioneered in 1920 in New York, and in a cart rather than a car. An Italian anarchist called Mario Buda packed a horse-drawn wagon with explosives and killed dozens of innocent bystanders on Wall Street in a protest against capitalism.
However, the first bomb to be transported to a target in a motorised vehicle was created by two fighters of the Lehi movement in pre-state Palestine.

These pioneers of a uniquely horrible form of warfare are still alive and were interviewed by the presenter, former CIA agent Bob Baer.

Yaakov Heruti and Eliezer Ben-Ami explained how they chose their target, the Soraya building in Jaffa, used as the headquarters of the armed Arab resistance. They parked their truck bomb outside the building and set it off, killing 28 people including innocent bystanders, and injuring hundreds more.

The two 83-years-old were unrepentant about the operation but regretted the non-combatant casualties. Said Heruti:
“We never wanted to kill innocent civilians and children, it happened by bad luck.”

Perhaps, but it must have crossed their minds that by exploding a truck packed with explosives in a crowded street without any warning, civilians and children were likely to be blown away along with enemy fighters.

This was not a film that set out to make any moral points – indeed most of those interviewed showed little remorse for their actions – but it did demonstrate that in every single case, the reverberations of the explosions had a negative impact on those who planted the bomb as much as on those who were attacked.
After the Lehi bomb, an Arab called Fawzi El Kuttub set about wreaking vengeance on the Jews. Trained by the Nazis in bomb-making, he aped the Jewish fighters by setting off car bombs which killed Jewish civilians in Jerusalem, and came close to assassinating future Israeli Prime Minister David Ben-Gurion. When the smoke eventually cleared, eight car bombs had been set off – four Arab, four Jewish – claiming 120 lives.
Source: The Jewish Chronicle

On Sunday, the 9th of 2014, I posted an article with appeared in the Jerusalem Post (Israeli) and The Telegraph (UK), stating that Tzipi Livni stated that her father, considered her father Eitan – who was the Irgun Zva’i Leumi’s director of operations during the pre-state days and fought British rule – as as freedom fighter.

Tom Segev responded to  her claim in a 2006 article in Haaretz Newspaper (Israeli):

The Livni test is interesting, of course, both because the foreign minister was basically talking about her father, Eitan Livni, who was the chief operations officer in the Irgun and later a Knesset member.

Naturally, Livni does not view the Irgun people as terrorists, but as freedom fighters. And so says the Irgun’s official history, too: It operated against military and government facilities, not against civilians.

Livni most likely was raised on this myth, on the lofty self-image nurtured by Menachem Begin even before his organization fell apart.

The Truth Was Different:

On July 6, 1938, Irgun people snuck a bomb into the produce market on Hamelachim Street in Haifa. Two Irgun veterans reported later, in a book that was printed with the aid of the Defense Ministry, that 18 Arabs were killed and 38 wounded in the operation.

In their book, “Divrei hayamim le’milhemet hashihrur” (“Chronicles of the War of Independence”), editors Yaakov Amrami and Arie Melitz described how the attacks were carried out:

Twice, the bombs were brought in inside baskets of vegetables. One bomb was placed inside a crate of shoe polish. Over the years, the organization also struck at buses, coffee shops and movie houses. People from the Haganah and Palmach also carried out actions against Arab civilians. Both were terrorists, also according to the criteria presented by Livni on “Nightline.”

Livni focused on the targets of the attacks, for a moment it seemed that she ruled out in principle any harming of civilians. This also makes for a nice historic lesson: Indeed, there is no justification for harming civilians. Never: Not in Dresden or Hiroshima or Hanoi or Beirut or Ramat Gan or Gaza.

But Livni also justified the artillery fire on Gaza, and then the definition game requires other participants: state-sponsored terror, harming civilians during wartime.

Neither Israelis nor Palestinians have ever forsworn terror. Both have used it and found on occasion that it advances their goals. Arab terror in the 1930s almost led to the expulsion of the British from Palestine, on the eve of World War II; Jewish terror gave a push to their expulsion in the late 1940s. There is a generation of Israelis that grew up not only admiring the terror used by the underground organizations prior to the state’s founding, but also on a whole ethos of wars against colonialist regimes everywhere.

Yitzhak Shamir called himself “Michael” after Michael Collins, the famed leader of the Irish underground.

Naturally, Israelis also grew up admiring the partisans who fought against the Nazis.

In the 1950s and ’60s, they identified with the liberation movements in Africa and South America. Along with their admiration for Che Guevara and Steve Biko – a leader of the struggle against apartheid in South Africa.

Israelis also nurtured friendships with leaders who had sat in jail up to then as terrorists: Israel gave them weapons and money, invited them to Israel and showered them with great honor. Their books were translated into Hebrew and published by national publishing houses. Nothing offended Israelis more than the pejorative “imperialists.”

Moshe Dayan compared the Fatah to the Irgun; in this comparison, Israel took the role of the despised British.

Many years later, Ehud Barak said that if he were a Palestinian, he would have joined the terror organizations.

Fatah hijacked planes and thereby put the Palestinian problem on the world map – Who knows if anyone would have heard about their distress if it weren’t for their terror?

It’s doubtful if Ariel Sharon would have initiated the dismantling of the settlements in the Gaza Strip if not for Palestinian terror.

This is the same Ariel Sharon who in the 1950s stood at the head of a renowned paratroop unit that committed acts of terror in Palestinian villages across the border.