Mark Twain often gets the credit for all sorts of witty lines, but it turns out that he didn’t say many of them. So we set ourselves the task of tracking down the lines that Mark Twain actually did say – and this post is the result. We hope you enjoy reading these 15 of the very best Mark Twain quotes as much as we enjoyed compiling them.

I haven’t a particle of confidence in a man who has no redeeming petty vices whatsoever. – ‘Answers to Correspondents’, The Californian, 17 June 1865

I have been complimented many times and they always embarrass me; I always feel that they…

Hi bloggers! My name’s Kjell Reigstad, and I’m a designer at Automattic. I’m happy to introduce the first post in a new monthly series on “The Principles of Design.” In this series, I’ll share some of the basic tenets of design, and we’ll explore how to apply them to your blog.

This week, we start out with a simple design concept: telling a clear story.

The main goal of any design is to get a message across. It may be a straightforward message (“Buy this product!”), or it may be a complicated one, but in all cases, there’s a story to be told. In an excellent design, every shape, color, photograph, and font choice works together to create a strong, clear message. Great designers add elements that contribute, and (just as importantly!), they weed out elements that distract.

Hi bloggers! My name’s Kjell Reigstad, and I’m a designer at Automattic. This is part two in my monthly series on “The Principles of Design.” In this series, I share some of the basic tenets of design, and we explore how to apply them to your blog.

As I mentioned in last month’s column, the main goal of any design is to tell a story. Just as any good story has a beginning, middle, and end, a good design story does too! It’s up to a designer to make sure that people progress through their stories in a way that makes sense. One of the key ways to do that is to establish a clear visual hierarchy to guide the viewer’s eyes through the design.

Let’s go through a quick example. Take a look at the image below. Which of these two…

Since I entered politics, I have chiefly had men’s views confided to me privately. Some of the biggest men in the United States, in the field of commerce and manufacture, are afraid of something. They know that there is a power somewhere so organised, so subtle, so watchful, so interlocked, so complete, so pervasive, that they better not speak above their breath when they speak in condemnation of it.– Woodrow Wilson, 28th President of the United States (1856-1924)

So you see, my dear Coningsby, that the world is governed by very different personages from what is imagined by those who are not behind the scenes.– Benjamin Disraeli, British Prime Minister(1804-1881)

The advent of the industrial revolution, the invention of a banking system based on usury, and scientific and technological advancements during the past three centuries have had three major consequences. These…

Civilians captured during the fall of Lydda and Ramle around the time of July 12, 1948 and taken to labour camps. In the July heat they were thirsty and were given a drop of water carried by a child under soldiers’ guard

Much of the grim and murky circumstances of the Zionist ethnic cleansing of Palestinians in the late 1940s have gradually been exposed over time. One aspect – rarely researched or deeply discussed – is the internment of thousands of Palestinian civilians within at least 22 Zionist-run concentration and labor camps that existed from 1948 to 1955. Now more is known about the contours of this historical crime, due to the comprehensive research by renowned Palestinian historian Salman Abu Sitta and founding member of the Palestinian resource center BADIL Terry Rempel.

The facts are these.

The study – to be published in the upcoming…

Christianity and Islam are often painted as mortal enemies that will be forever fighting in a war for religious supremacy. Christians and Muslims would be wise to remember that Jesus Christ and Prophet Muhammad are kindred spirits. By turning to their teachings, we can see that these two prophets are brothers, not foes.

Jesus and the Prophet were proponents of peace. Jesus told his followers: “Blessed are the peacemakers, for they shall be called sons of God” (Matthew 5:9). Saint Peter, one of Christ’s disciples, echoed this message of goodwill by encouraging people to “turn away from evil and do good… seek peace and pursue it” (Peter 3:11). Roughly 600 years after Jesus, Prophet Muhammad revealed his revelations to the tribes of Arabia, where Muhammad was particularly adamant about establishing peace. One of the Prophet’s favorite sayings was: “Forgive him who wrongs you, join…

By JOSEPH FITSANAKIS | intelNews.org
The government of West Germany secretly funded the Israeli nuclear weapons program during the Cold War, according to a leading German nuclear expert. Today, Israeli authorities continue to deny the existence of the country’s nuclear weapons arsenal. However, it is generally accepted that the country’s atom program began as early as 1952, with the establishment of the Israeli Atomic Energy Commission. By the mid-1960s, Israeli scientists had built at least one nuclear bomb; and by the time the Six-Day War broke out in 1967, the Jewish state had at least two nuclear warheads in its possession.

But how could a small, developing country fund one of the most expensive weapons programs in existence? According to Hans Rühle, one of Germany’s leading nuclear experts, the Israeli nuclear weapons program was primarily funded by the Federal Republic of Germany. Rühle was head of planning for Germany’s Ministry… 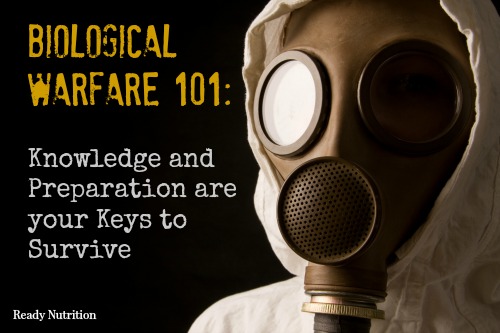 “I’m just lookin’ for clues at the scene of the crime, life’s been good to me so far.” – (Joe Walsh)

Good day to you, Ready Nutrition readers. Today’s piece is the introduction to Bio-Weapons and Biological Warfare, the first part of a series to outline some basic fundamentals you will need to safeguard yourself and your family. Many people greatly fear biological weapons of mass destruction and this is understandable; however, we are addressing this topic in an analytical fashion to enable others to understand it. When you know what the dangers are and how to protect yourself from them, that knowledge can transform fear into caution: you can walk in the strength of knowing and that you have the ability to defeat the problem.

We start in a systematic manner, from the basics. If you notice there is a paradigm with preparations: problem…